So you found out you’re pregnant a few weeks ago and you can’t wait to meet your little one. But today you saw blood in your underwear. Does this bleeding mean something has happened with your pregnancy - could it be a miscarriage?

Well first off, take a deep breath. There can be plenty of reasons for bleeding during pregnancy and you don’t have to assume the worst. We did some research into what bleeding could mean.

Find out for sure with a free test at

Get My Free Test

To begin with, let’s define what exactly a miscarriage is.

A miscarriage is defined as the spontaneous loss of a pregnancy before the 20th week (1).

As a general fact, most miscarriages occur before the 12th week of pregnancy (1). There are a couple different signs that can point to miscarriage during this time. Even if you do experience these symptoms, that does not guarantee you have had a miscarriage (1):

If you are experiencing any of these symptoms and are worried that you may have caused them to occur, keep in mind that these routine activities don’t provoke a miscarriage (1):

When in doubt, you should always talk to your doctor. That said, there are some signs of miscarriage that require calling 911 or going to an emergency room immediately (3). Seek help if you have any of these symptoms:

What is severe bleeding like? Heavy bleeding may mean soaking more than one pad in an hour or passing golf-ball-sized blood clots (4).

Typically, an ultrasound scan will show if you are having a miscarriage (5). 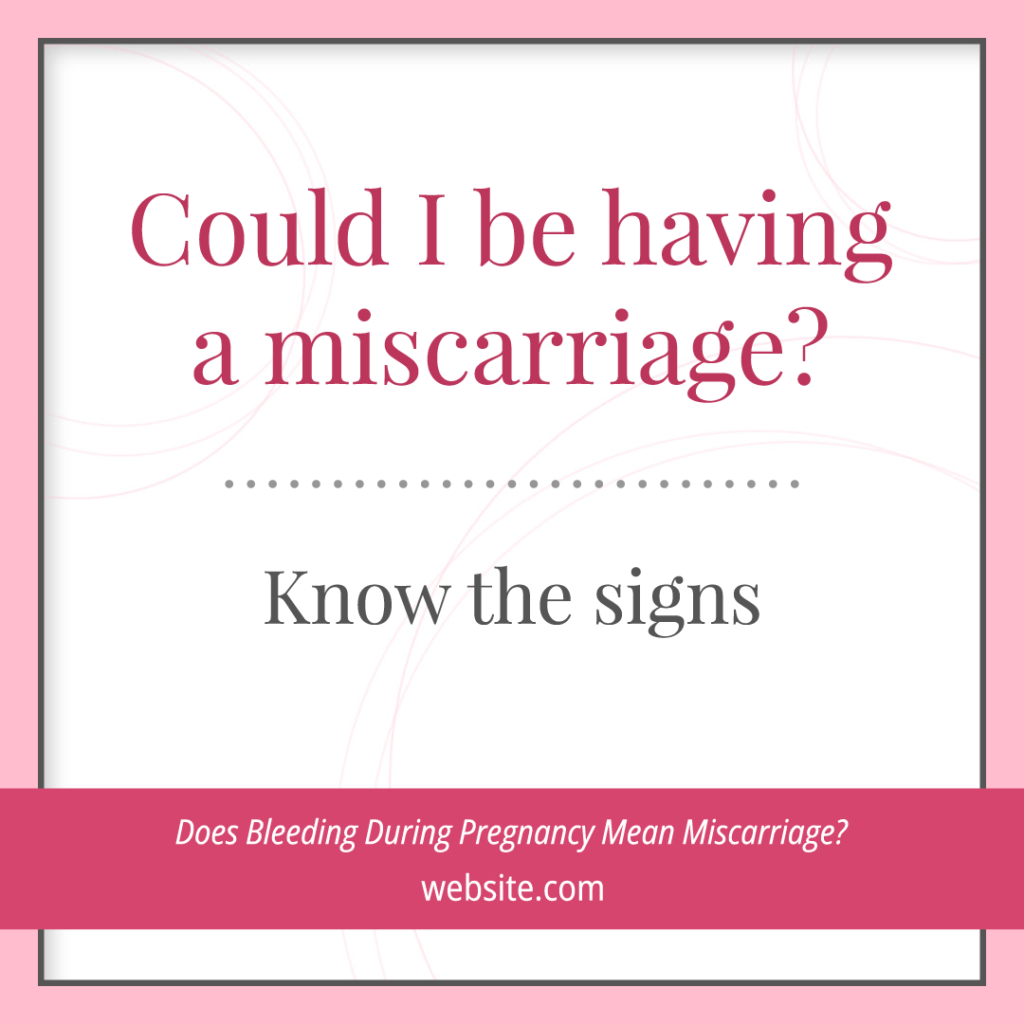 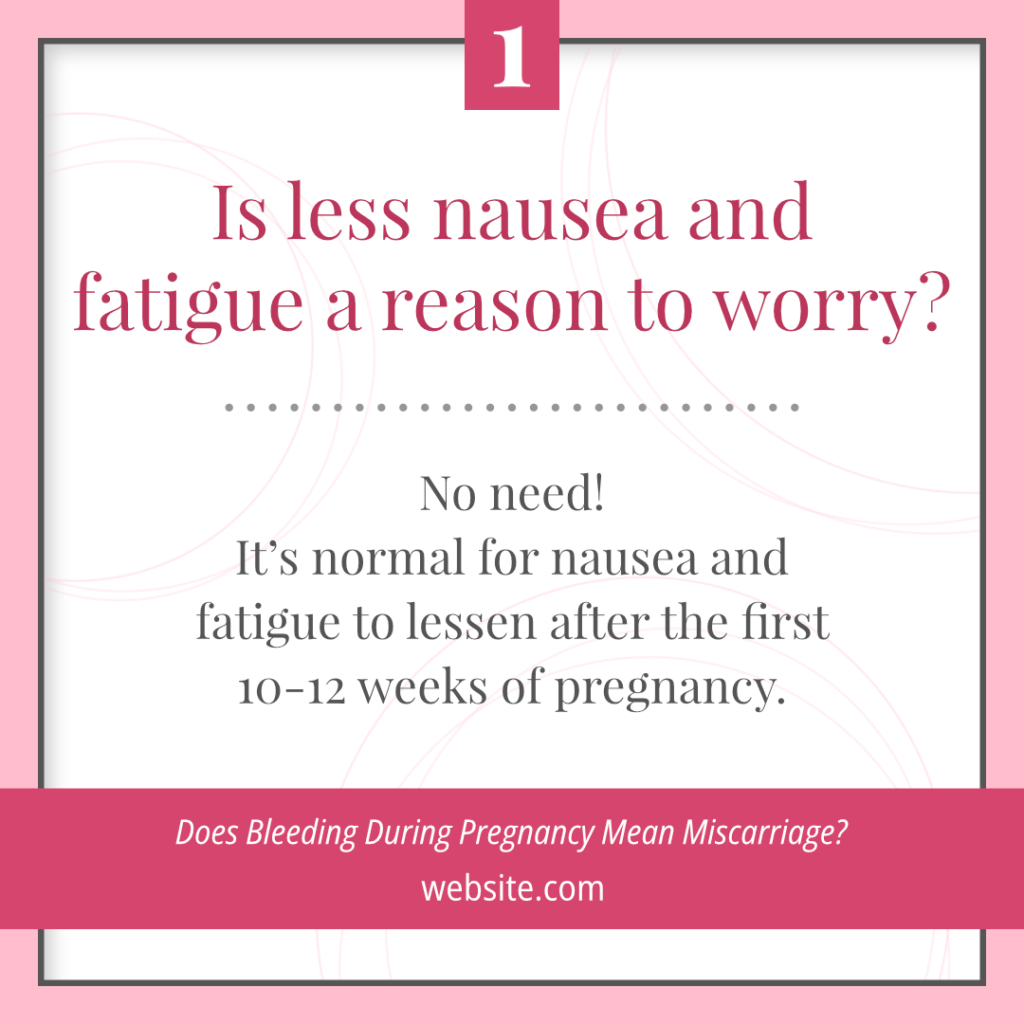 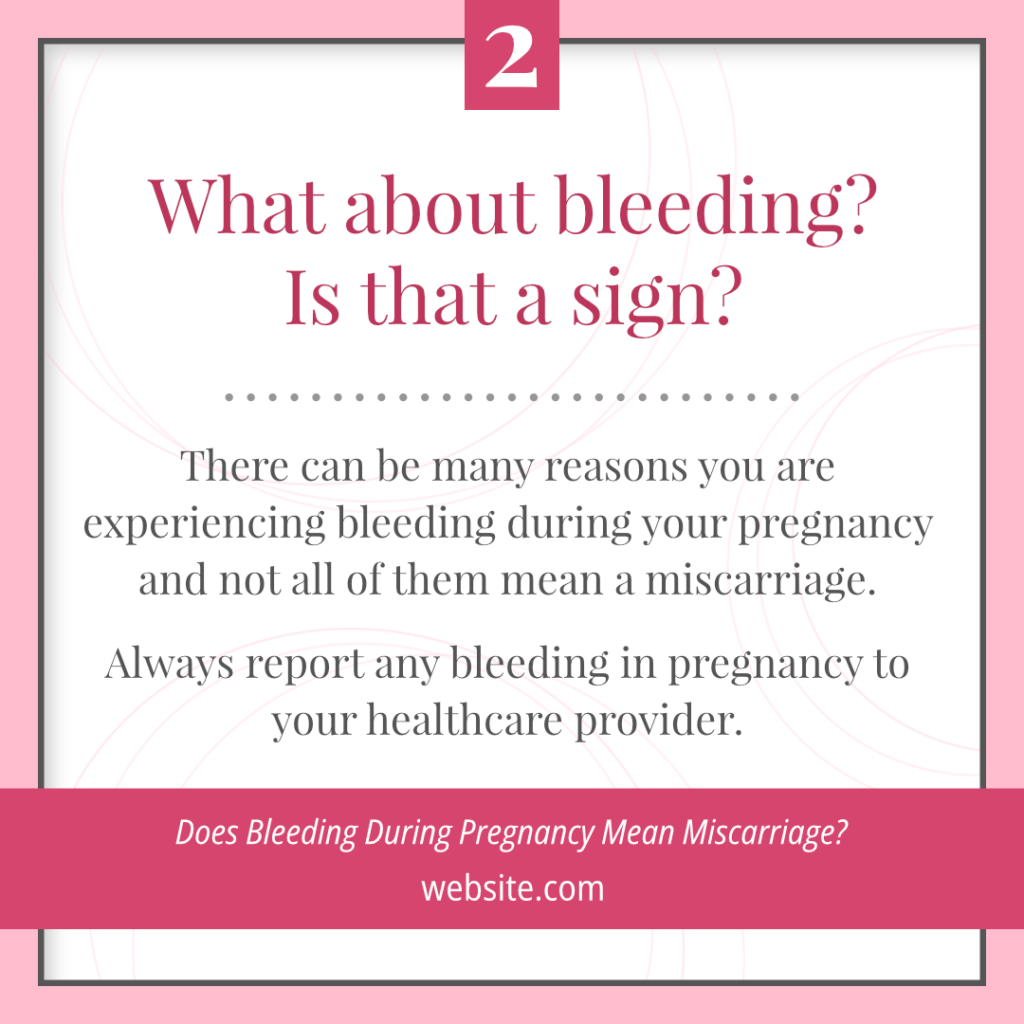 While your bleeding may not mean you had a miscarriage, if you do experience one, you are not alone in your experience. In fact, far from it. Miscarriages are much more common than most pregnant women realize.

You’re at the highest risk of miscarriage around 4 to 6 weeks after your last normal menstrual period, but as long as the bleeding doesn’t become heavy, you can relax (2). But if it’s not an early miscarriage, why are you bleeding while you’re pregnant? Well, during pregnancy, extra blood is flowing to the cervix. So nearly any contact with the cervix, like intercourse or a Pap test, can trigger light bleeding (3). However, any type of bleeding should still be reported to your doctor immediately.

While the term “miscarriage” may mislead some to believe that something went wrong in the carrying of the pregnancy, this is rarely the truth.

The mother is almost never at fault when a miscarriage occurs, and no specific action may have triggered it. Most miscarriages happen because the fetus isn’t developing as expected, something completely out of the mother’s control (1).

Despite knowing this, the emotional pain of a miscarriage can be hard to manage. This is why it is important to take the step of learning the possible causes of miscarriages and allow healing to begin.

Emotional support is available at
NAME OF CENTER

As stated previously, there can be many reasons you are experiencing bleeding during your pregnancy. Not all of those reasons mean miscarriage or an unhealthy baby. Here are some common causes for why you may be bleeding and what they mean.

Beeding is most common in the first trimester (first 3 months) of pregnancy (5).

Implantation bleeding is spotting that happens when you expect your period to arrive (3). It happens around 6 to 12 days after conception as the fertilized egg implants itself in your womb (3). The bleeding is light and may last a couple of days, but it’s perfectly normal.

A pelvic exam or sexual intercourse may cause your cervix to become tender and inflamed, leading to light spotting that should be resolved within a day or so (6).

Ectopic pregnancy is when the fetus starts to grow outside the uterus, often in one of the fallopian tubes (4). Symptoms of this may be cramping, vaginal bleeding and abdominal pain (4). This is a medical emergency and needs immediate surgery at an emergency department. 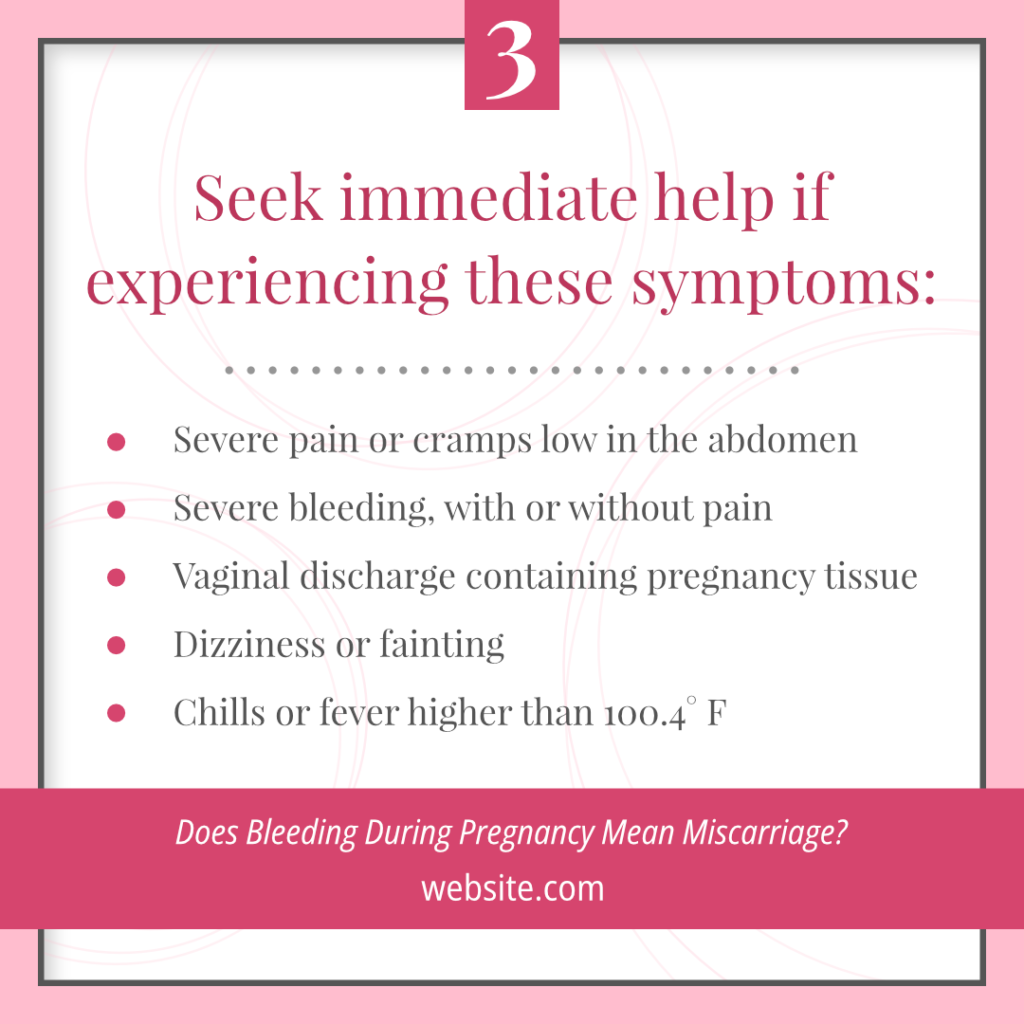 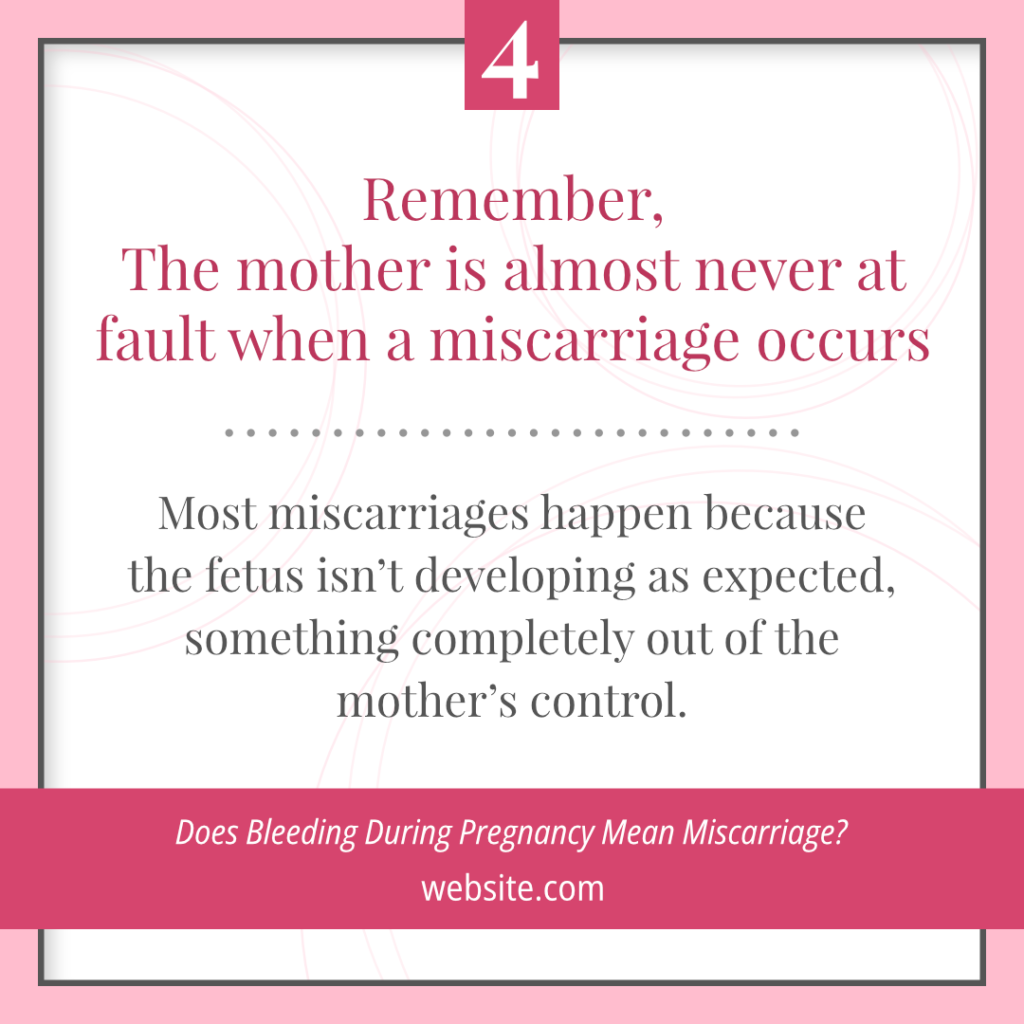 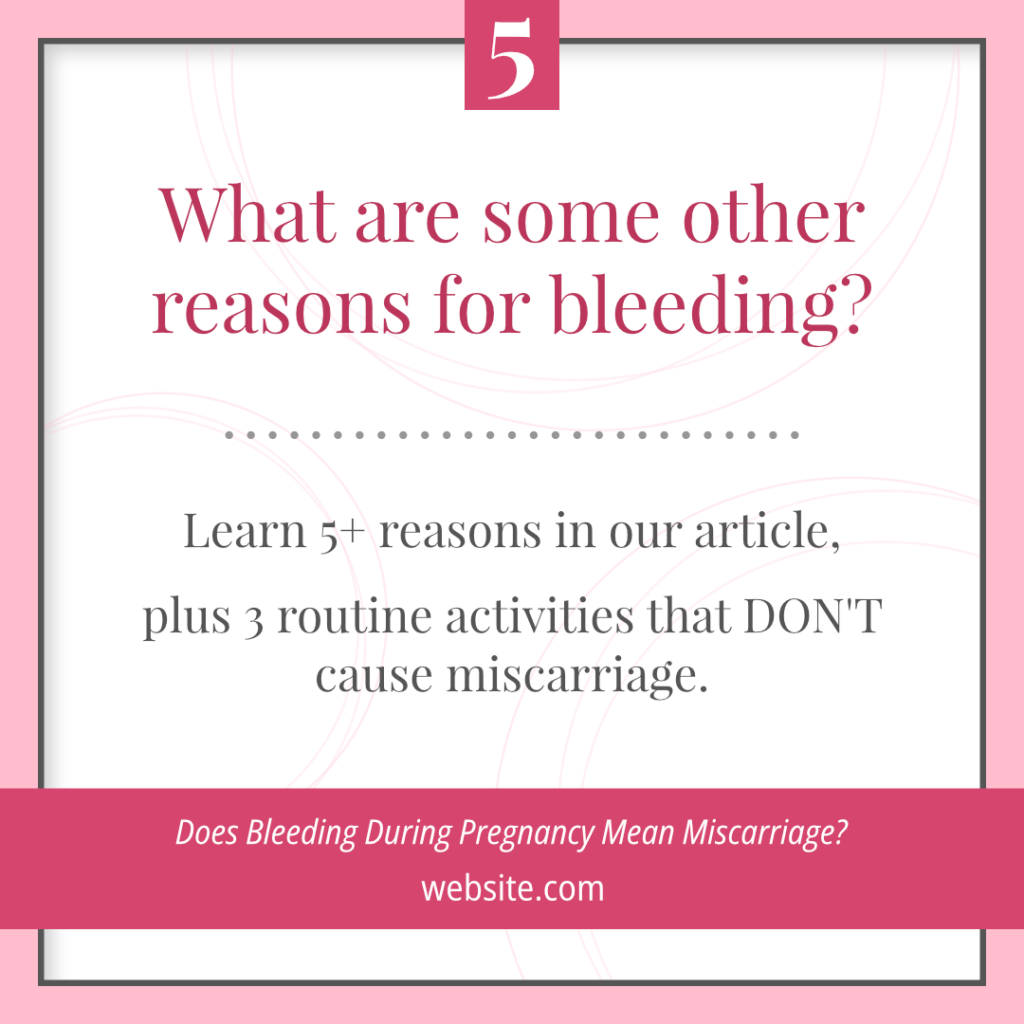 Sometimes, vaginal bleeding in the second or third trimester is minor. Still, you should see your doctor to make sure (6).

An incompetent cervix is when the cervix starts to dilate too soon, which can result in miscarriage or pre-term birth (6). This complication happens in around 1 out of 100 pregnancies and causes nearly 25% of miscarriages that occur in the second trimester (6).

When part or all of the placenta separates from the uterine wall before the birth of your baby, this is placental abruption (4). The amount of bleeding may vary, and so does the impact on your baby. You may just need simple bed rest for treatment, or, in more serious cases, your baby may be delivered early (4).

Placenta previa is when the placenta is either partially or fully covering the cervix in the lower part of the uterus (4). Bleeding after 28 weeks of pregnancy is a sign of this medical condition, and diagnosis must be done by ultrasound scan (4). If you have placenta previa, your baby will typically be born by cesarean section (4).

Get answers to your medical questions at
NAME OF CENTER

Where to get help:

You should always report any bleeding in pregnancy to your doctor or a healthcare provider. Visit your local emergency room if any type of heavy bleeding occurs, as this could mean emergency surgery is required.

Disclaimer: This website is for educational purposes only and is not a substitute for medical advice, diagnosis or treatment.  NAME OF CENTER does not provide abortions or give referrals for abortions.

2. Milanowski, A. (2020, September 1). Early signs of miscarriage (and when not to panic). Cleveland Clinic. Retrieved June 13, 2022, from https://health.clevelandclinic.org/early-signs-of-miscarriage-and-when-not-to-panic/

6. Danielsson, K. (2020, December 1). Is it normal to bleed during your pregnancy? Verywell Family. Retrieved June 13, 2022, from https://www.verywellfamily.com/does-early-pregnancy-bleeding-mean-a-miscarriage-2371230

7. March of Dimes. (2020, April). Bleeding and spotting from the vagina during pregnancy. March of Dimes. Retrieved June 16, 2022, from https://www.marchofdimes.org/complications/bleeding-and-spotting-from-the-vagina-during-pregnancy.aspx 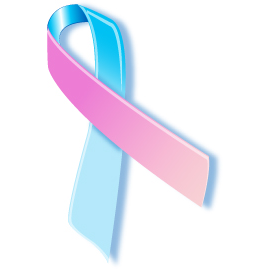